Transforming the Dome from court to concert 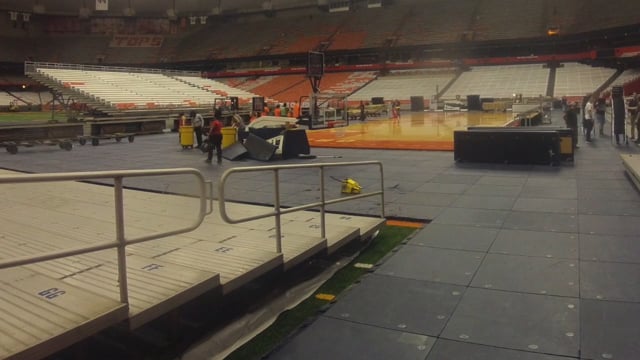 Watch this time-lapse of staff and student workers transitioning the Dome from football turf to basketball court.

A crew of 75 students spent their Saturday night in the Syracuse University Carrier Dome, swinging sledgehammers to smash an ice rink into transportable pieces. They carted the chunks and shards out of the building with wheelbarrows, piling them outside. By Sunday morning, just eight hours after the hockey match ended, the only evidence of the ice was a melting mound in the Standart parking lot.

The rink from the Toyota Frozen Dome Classic needed to be dismantled by noon the next day, so the employees could assemble the basketball court for that week’s game against Loyola (Maryland). Normally the process to melt the ice involves shutting down the system to stop the refrigerant and waiting several days until it thaws.

“We can’t do that,” said Doug Reymore, a SUNY-ESF senior and Dome operations student employee. “We don’t have the drainage and we didn’t have the time.”

Reymore watched the process to host the first professional hockey game in the Dome come together over several months, from crews that drilled custom holes to fit the refrigerant system piping, to the November night when 30,715 attendees (the largest crowd to watch an indoor pro game in the U.S.) filled the Dome for the match between the Syracuse Crunch and Utica Comets.

The Dome hosts between 211 and 275 ticketed events every year. These include student athletic games like basketball, football and lacrosse, as well as concerts and special events like the Frozen Dome Classic. Maintaining this busy schedule requires a quick turnaround time between events. This is a behind-the-scenes look at the people, time and labor that make them happen.

The Dome staff depends on part-time labor provided by students from SU, SUNY-ESF, LeMoyne and Onondaga Community College. They work late nights and unconventional hours to complete the changeovers between events.

“The student crew is a great crew to work with,” Mike Kravec said, event manager. “We’re really lucky to have them.”

The Dome also hires outside staff, like members from the local branch of the International Alliance of Theatrical Stage Employees (IATSE) union, to handle more technical work. Some acts and shows, like the annual monster truck tour, Monster Jam, have professional crews that travel to the venues to prepare for the events.

The process to set up and tear down these events is often complicated by the design of the 35-year-old building. The airlock door, which is the only entrance trucks can use to enter the building, is too short to fit a standard size, 53-foot tractor trailer. Getting the trailer inside requires renting a short horse, or a smaller cab. Another delay is caused by the careful process of opening and closing the set of doors which is necessary to maintain the pressure inside the Dome.

Another structural issue is the iconic Teflon-coated, fiberglass roof. Normally indoor venues can rig performer’s production equipment to the ceiling, but the Dome’s fabric roof can’t support the light and sound gear, which weighs between 50,000 and 150,000 lbs.

“We’re an outdoor building with indoor problems,” Pete Sala said, vice president and chief facilities officer. To resolve the inability to rig to the roof, artists have to rent a ground support system, which ranges from a quarter to half-million dollars.

One business the Dome rents from is Mountain Productions, a staging and rigging company based in Wilkes-Barre, Penna. They’ve provided stages for at least 20 shows over the past 35 years, including Van Halen, The Police, Grateful Dead, Madonna and Prince. It takes three to five days and 30 employees to set up for these larger shows, said Jim Evans, president of Mountain Productions.

The annual Block Party concert, held at the end of spring semester, takes less time. Evans said he needs 10 crew members for these one-offs, or one stop concerts, which require only a small stage and minimal equipment. It can be delivered in two trucks, unlike touring artists who can have ten to twelve trucks trucks just for the stage and the same amount for their production gear.

Before they can even start to set up for events, the turf field needs to be covered and converted into a stable floor. Student employees for Dome operations complete much of this work. The process usually involves laying bravos, or blue, interlocking mats, and two layers of plywood. For the annual Monster Jam event, they protect the turf with a layer of plastic under the plywood.

It takes four to five days to convert the football field into a track. The Dome owns the dirt, which is stored at Skytop on SU’s South Campus. They hire a local trucking company to transport the dirt several miles to the Dome. The Monster Jam dirt crew, the professional crew that sets up the tracks, uses heavy machinery to move the dirt. Sometimes they have to add sand to get the right consistency.

For the Saturday event, the operations staff starts laying the plastic and plywood, but no bravos, on Tuesday night. This gives the dirt crew several days to prepare. Josh White, a senior at SUNY-ESF and an operations employee, remembers hearing the trucks revving their engines in the Standart parking lot outside his dorm freshman year. The next year, he was helping to set up for the event.

The students were also tasked with picking dirt out of the turf after Monster Jam ended.

“There’s a lot of time and effort spent into keeping the turf clean after every changeover, [like] picking the field,” Reymore said. “We get a lot of people to line up and go through it and make sure there’s nothing in it, especially after big events.”

But Reymore noted that workers still find glitter from the Kesha concert in 2013 and confetti from Kygo last spring stuck to the bravos.

“Every little detail that you take for granted when you’re going to a concert and it’s fun – someone’s working hard to put that together,” Reymore said.