From Sinatra to Snoop, concerts make memories for fans 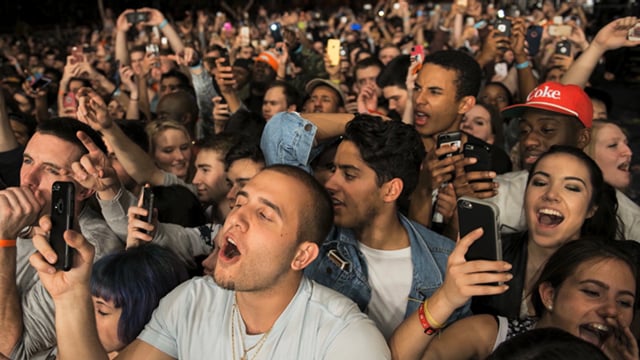 We asked students to discuss positives, negatives of attending a concert in the Carrier Dome.

It’s March 2015. Billy Joel has come back to the Carrier Dome for a seventh time. Alyssa Foisy, a health and exercise science junior, sits in the audience watching the 66-year-old singer-songwriter perform  “Piano Man” to a sold-out crowd.

The atmosphere is electric as Joel stops singing and the crowd takes over: “Sing us a song, you’re the piano man. Sing us a song tonight.”

“The entire Dome just echoed with people singing,” Foisy said. “It was just a very surreal moment, sitting there with 35,000-plus people enjoying that moment.”

That’s not the first time Foisy has felt the energy of a concert in the Dome. She has also attended Nov. 2014’s Macklemore and Ryan Lewis concert as well as University Union’s 2014 and 2015 Block Parties featuring Zedd and 2Chainz as well as 50 Cent and Kygo, respectively. Every time was a time to remember.

A quick Google search of the Dome finds 1.6 million results in 0.63 seconds, and the top descriptor is “Sports dome in Syracuse, New York.” For many current students and alumni, however, the Dome symbolizes a relationship that goes far beyond collegiate sporting events; it symbolizes a long-held love affair with some of the biggest names in music history.

Since its creation on Sept. 20, 1980, the Dome has been the home to 65 major headliners, as well as a slew of university- and student-run events. The Dome hosted its first concert on Oct. 22, 1980, just a month after it was created, when Frank Sinatra graced the Hill. Ever since, it has hosted the likes of Bruce Springsteen, The Grateful Dead, Duran Duran, U2 and Pink Floyd, among others.

Pete Sala, vice president and chief facilities officer and managing director, has worked in the Dome since it first opened its doors. He has overseen virtually every aspect of the Dome, rubbing shoulders with some of music’s top entertainment stars.

Sala is in talks with major labels and entertainment companies like LiveNation and Ticketmaster all year. He speaks to labels up to a year in advance to bring big acts to campus. He’s developed relationships with major artists like Billy Joel, whose recent Dome appearance was March 2015, and Garth Brooks, who came April 1997.

“Garth Brooks was a riot to work with; we had a ball with those guys,” Sala said, recounting memories of going out to dinner with the country star and helping the group transition to a European tour directly following their concert. “The country guys — they were here to have fun.”

In addition to LiveNation, Sala has worked with student groups to bring artists to the Dome.

University Union has a strong relationship with the Dome, according to Sala, and has hosted the Block Party in the Dome every April since 2003. Block Party has brought artists ranging from Snoop Dogg, Kanye, Fergie, and Drake, to Kesha and Kaskade to the Dome.

Some fraternities and sororities have also hosted concerts in the Dome. The Thrillin’ Theta Xi chapter of Phi Beta Sigma fraternity brought J. Cole on March 21, 2014.

“As long as student groups are able to put together a business plan so that we can cover our expenses, those are usually what it takes,” Sala said.

Other non-sporting events in the Dome

The Dome goes beyond holding just concerts outside of sports — it is also the home to 40-50 non-athletic ticketed events and another 30+ university sanctioned events, according to Tom Benzel, assistant director of business and operations for the Dome. Some of the major stand outs include Relay for Life, convocations, commencement, career fairs and informationals, and the annual Martin Luther King Jr. dinner, among others. Students also utilize the Dome to host philanthropy events for fraternities and sororities, as well as the bi-annual Otto’s Army events.

As long as the desired event date does not coincide with any existing sporting or university-sanctioned event, Sala’s willing to make the event work.

Student reactions to the Dome

For many students, the Dome acts as a symbol of their university. They attend concerts and events and like knowing they are in a place others only see on TV.

“The Carrier Dome is sort of a legend in its own right as far as venues go, so it’s kind of cool to say I go to school there,” said Alyssa Foisy.

Other students, however, voiced grievances about the Dome. Randy O’Neil, an information management and technology senior, said he doesn’t plan on going back after his experience seeing Billy Joel. O’Neil had been to Block Party 2014 and the Billy Joel concert, but said the acoustics were “absolutely horrible.”

“As a historical object … it’s a cool landmark and being able to say that I’ve been in a place that some people have only watched on TV, that’s cool,” O’Neil said. “But I’m probably not going to go to another concert in there because it seems like a waste of money when you’re paying $100 a ticket to see Billy Joel but you’re not actually hearing him play.”

Either way, Sala and his team aren’t stopping any time soon. Up next, Luke Bryan is set to join the ranks of headliners this May. Sala has no plans to stop there — he’s always on the hunt to fill the Dome with the next big act.