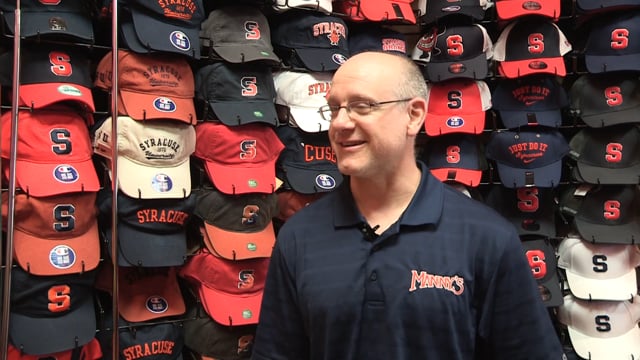 By Cullen Lea and Kathryn Robinson

David Holder, president of the Syracuse Convention and Visitors Bureau at CenterState CEO, believes Syracuse and Paris have something in common: Iconic buildings people automatically associate with their respective cities.

“The Carrier Dome is a landmark for the city of Syracuse – if you’re driving into the city, you can see it from miles away,” he said. “Everyone knows about the Dome, recognizes it. It’s Syracuse’s Eiffel Tower, if you will.”

At 35, though, the Dome is old, particularly for a structure that relies on an inflatable roof. Syracuse University’s Board of Trustees is expected to make a decision about the future of the Dome this year, choosing a new inflatable roof, a permanent roof or an entirely new facility.

It’s a decision that will help shape the future of Syracuse. The Dome and the university as a whole attract people and dollars, and are key components for marketing the entire region, said Holder, whose job is to bring people to the area. And the university’s influence on the region’s overall economy is growing.

“We’re seeing a lot more of the university, from spectators to students to participants at conferences,” Holder said. “The University drives an enormous amount of business into the area.”

“It doesn’t necessarily translate directly into economic development,” Moriarty said. “But it does help the community become a little more well known.”

Second, he said, the events at the Dome, the sporting events especially, attract many outsiders — and their money — to the city. After the games, people go to local restaurants and bars, providing a key source of revenue to those businesses.

Holder agreed that the events at the Dome are huge economic generators for the Syracuse community. For example, The World Indoor Lacrosse Championships that took place in the Dome in September.

Visitors to that one event spent more than $3 million on hotel rooms, food, drink and other items in the Syracuse area during the tournament, Holder said. The Frozen Dome Classic  — the staging at the Dome of the largest indoor hockey game ever played — was made possible because of the uniqueness of the Dome, Holder said. That’s “a really cool thing for Syracuse to claim,” he said.

Nevertheless, Holder estimates the amount of revenue the Dome generates is probably in excess of $25 to $30 million when you look at all the spending throughout the community that events generate.

Both Holder and Moriarty said the uniqueness of the Dome is part of its charm — and utility as a marketing device. The hallmarks are its on-campus location, flexibility, capacity and one-of-a-kind structure, they said.

Holder said it’s location make local businesses easily accessible to eventgoers. SU associate dean at the Maxwell School and economics professor Michael Wasylenko said the 49,250 seats in the Dome dwarf most college arenas, which typically hold 18,000 people. He believes the capacity gives the Dome an advantage in holding a variety of games and events.

Holder agreed that it is an exceptionally flexible facility.

“The Carrier Dome is the most flexible college facility in the country in terms of its ability to host football games, soccer games, basketball games, lacrosse games, concerts, graduations, etc.,” Holder said. “There aren’t many facilities that can hold that many units of sports or events in one facility – especially on college campuses . . . The flexibility and multi-use of the Dome is what has given us an advantage that many other communities don’t have.”

“People are fascinated by that,” he said.

It’s imperative to Syracuse that the Dome either remains a viable and functional facility, or that it be replaced with something that gives Syracuse some similar advantages, Moriarty and Holder said.

In regards to the future of the Dome and the decision of whether the University should replace the current inflatable roof with a brand new one, build a permanent roof or build a brand new off-campus arena, Holder, Moriarty and Wasylenko all believe that the economic impact and uniqueness of the Dome should to be preserved. However, they believe there are a few elements that the Board of Trustees will need to take into consideration.

Moriarty argues that if a new arena is built, it is vital that the new arena have the same tenacity as the Dome and remain a major modern sports facility.

In addition, Moriarty believes the University will need to take into consideration the cost – which might be an issue.

“Syracuse is a private university so any change will have to go through the State,” he said. “Finances are going to be a big consideration for the University when making this decision – what they can afford to do and how much assistance they can get from the State.”

Wasylenko also believes that cost will be an issue for the University. He said that building a large sports facility, with a multi-use component, is extremely expensive and if the Board of Trustees decides to build a new arena, the University will most likely need funding from the State.

The Board of Trustees will be meeting this month to discuss the future of the Dome and will make a decision by the end of the academic year.