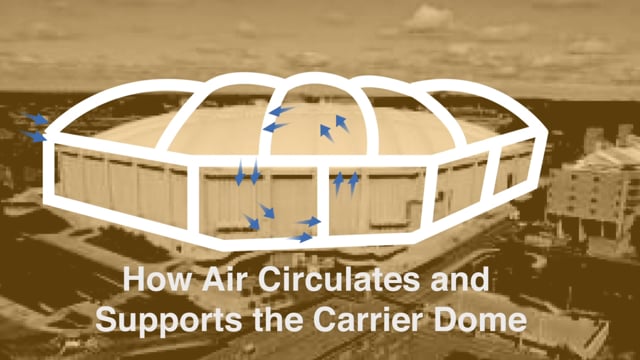 How Air Circulates and Supports the Carrier Dome

An in-depth look at the systems that circulate air throughout the Dome, maintaining the pressure that keeps the Dome aloft.

The Carrier Dome is among the last of its kind, a survivor of a nearly extinct breed: the air-supported roof stadium.

The UNI Dome, the Dakota Dome and the Minneapolis Metrodome: All dead and gone.

Some made spectacular exits. In December 2010, in the midst of the fifth biggest snowstorm in Minneapolis history, the Metrodome’s roof collapsed and sent an avalanche of snow onto Mall of America Field.

The Dome has avoided this fate, in part because of a constant, 24-hours-a-day, 365-days-a-year effort to keep the roof aloft.

The Dome’s staff monitors the facility’s 16 five-foot diameter fans around the clock. Increasing the power of the fans boosts the air pressure in the facility, adding tension to the roof’s fabrics and cables. While the fabric and cables keep the roof inflated, it’s the eyes and ears behind the scenes that really support the stadium.

Managing Director Pete Sala said that maintaining the right amount of air pressure in the building is incredibly demanding.

“It takes a constant effort to keep the Dome aloft,” he said.

The university now faces three options for the Dome’s future: renovate, relocate or replace the roof. While many have been quick to suggest replacing the inflatable roof with a different structure, much of the Syracuse community remains unaware of the key factors surrounding the debate. The current structure’s upper walls cannot support a heavier roof, as they were designed to shift when the air pressure in the inflatable roof changes. The facility’s complex structure makes deciding on a sensible plan for the future extremely difficult, Sala said.

The Dome, designed by Geiger Associates in 1979, is the largest structure of its kind on a college campus in the country. Its inflatable roof consists of 64 panels of Teflon-coated fiberglass along with 14 bridge cables, some as long as 700 feet (and weighing 7 tons each). The facility cost $26.85 million to construct which, according to original engineer Paul Gossen, was quite a bargain at the time.

“$26 million was unheard of,” Gossen said. “Today you couldn’t even get part of a roof for that much money.”

Inflatable roof materials were significantly less expensive compared to hard roof materials at the time of construction, but there are drawbacks to this type of structure.

When snow sits on the roof, more air pressure is needed to balance the weight of the snow. Without increasing the air pressure, the roof deflates. In the event of a storm, the Dome’s staff heats the building and roof panels in advance, melting the snow as it falls. When too much snow falls too fast and starts to accumulate on the roof, people are sent onto the roof with 120-degree water hoses to melt the snow. At this point, the staff can measure how much the roof is compressed and can monitor the snow’s accumulation.

“When the air pressure is balanced by an external load, the roof becomes like a jelly cake because there’s no stability anymore,” Gossen said.

The roof has deflated several times but never collapsed. But, according to Gossen, deflation is an inevitable concern with an inflatable roof, especially in cold weather climates.

“We have had deflations,” Gossen said. “When snow starts sliding down the roof, damaging the fabric and making a big hole in the roof, of course air will seep out and the roof will deflate.”

Though many worry about the inflatable roof’s potential to collapse, this is really an economic issue rather than a safety concern, as the university would need to pay to repair the damages. However, the roof was built in a deflated position with its cables at least 30 feet above occupied space at all times, so no one inside the Dome would be harmed if the roof were to deflate. The fabric is also designed to carry both cables and snow loads, and is equipped with several “pop-out drains” that discharge excess water in case of a storm.

“The roof is like a dish. Once it’s deflated, it cannot drain anymore,” Gossen said. “What we designed were pop-out drains, which are rubber plugs that essentially pop out and discharge all the water down to the field, so that the roof is not jeopardized.”

The inflatable structure does have several advantages despite its weight restrictions and maintenance requirements. Along with being inexpensive, the inflatable roof allows for natural light to enter the facility, making it an attractive option when first constructed. More natural light meant less demand for electric light and heat in the building. In a stadium the size of the Dome, heating and lighting the facility is pricey without any source of natural light.

The sunlight that shines through the fabric-based roof also creates more of an outdoor stadium atmosphere. Though an outdoor stadium would not be a viable option in Syracuse, staying true to the traditional college football experience was important to those who planned the original facility’s structure.

“Because it was a football facility, the university wanted to keep the outdoor facility feeling as much as possible,” Gossen said. “A lot of the athletic facilities constructed at that time were exactly built for that reason.”

Event Manager Mike Kravec agrees the facility has both strengths and weaknesses. While the inflatable roof caters to large crowds and Northeastern weather conditions, its inability to support heavy external loads presents a challenge when it starts to snow.

The roof requires constant care and cannot be used to hang heavy objects, as they would displace the air-pressure in the fabric. This limits the events the Dome can hold, as most large bands have sound systems designed specifically to hang. Since hanging lights and sound systems are not viable options, the Dome has struggled to transition into an entertainment facility.

Energy-related costs are a big expense in the facility’s budget, particularly in inflating the roof and heating the building, Kravec said. He said heating a space the size of the Dome costs the facility “hundreds of thousands per year,” which is why there is currently no air conditioning system. Kravec said the issues regarding AC are strictly cost related and are not influenced by the roof’s material. If air conditioning was added to the facility, finding space for the cooling towers and air conditioning units would be an added challenge and expense.

Kravec recognizes the challenges that come with an inflatable roof, but also sees the landmark value of the Dome’s structure. Whether the Dome stays or goes, the facility has certainly become a staple of the city and university.

“There are a lot of pros and cons to having this style roof here, but it’s also kind of the trademark of our facility,” Kravec said. “It’s definitely what makes us unique in the sports landscape in general.”

Domes across the nation

This map illustrates a geographical representation of the domes in college football across the United States. It should be noted that the Metrodome, the Mini-Dome, and the Superdome (as indicated by the gray icon) are no longer used by the respective schools. To access a video of the facility (or in some cases a picture), click on the picture of the stadium.

Noteworthy trends:
• Domes can be found in both hot and cold weather climates.
• In cases of the larger domes (like the Alamodome, Superdome, Georgia Dome, etc.), these stadiums are run by neighboring professional franchises and organizations. The notable exception is Syracuse University’s Carrier Dome.
• Only about half of the colleges still using domes are in the FBS (Division 1-A conferences)
• Only five of the schools feature domes with capacities over 20,000 people. Of these, two are no longer in use and in the case of a third, a new stadium is being planned for the future. To compare, the average attendance for an FBS game was 44,603 for 2014.
• Two schools (indicated by the blue icon) already have plans in place for a new stadium in the future. These join three other schools which no longer use the nearby domes.

Additional Information: In some cases, the max attendance is noted above as the total stadium capacity. These numbers were based on information provided by official school sites and other dependable sources.

360 Video: The Dome After Dark

Here are tips for watching the 360-degree video on your device to see the Dome staff following a November football game.

Mobile devices (iPad, iPhone, Android): Open the video on your device’s Youtube app. In order to look around, you will need to turn or tilt your device in the direction you want to look.

Google Cardboard (Android devices only): Play the video on the Youtube app. Press the “Cardboard Viewer” icon at the bottom of the window. The screen should switch to stereoscopic view (double image). When that happens, place the phone into your Cardboard kit.

Desktop: There are three ways to look around in 360 on a desktop browser. With the W, A, S, D keys on the keyboard, by clicking and dragging your mouse along the video, or by using the “arrow pad” which Youtube will have in the upper left corner of the video (Note: 360 video does not work on Safari browsers).