Working sports into the Dome 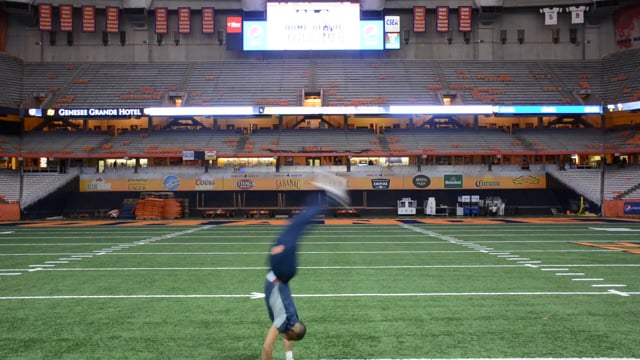 What’s In A Game?

A look behind the scenes as to what happens inside SU's sports arena during the hours before the doors open.

Syracuse University has an abundance of athletic groups on campus, whether it’s varsity sports, sport clubs or intramurals. However, for various reasons, not all of them play in the Carrier Dome.

Although only five teams play in the Dome now, others have used the building in the past but don’t use it currently because of space issues. A couple of softball games were held in the Dome years ago. However, they no longer hold games in the stadium because it was tight and dangerous, according to Peter Sala, the managing director.

“The young ladies were very close to the wall,” he said. “Dangerous foul ball situations and not a lot of runoff room from third base, or first base depending on how you laid out the field. There’s not a lot of room for overrun to hit the wall, and then our distances to the fence was short. There was a very short pitch in either left or right field.”

Sala said he was always on the edge of his seat worried about everyone’s safety during the games.

In addition to softball, the track and field team played in the Dome when there was a removable surface; however, Sala said that hasn’t happened in 12 years. This is because there isn’t currently a wooden, raised track inside the Dome, which is necessary for the team, according to Sala. He also said field hockey players don’t like the surface either, so they don’t play in the Dome.

Soccer played in the Dome before they had an outdoor stadium, Sala said. The field is made of FieldTurf, which is a synthetic grass. The FieldTurf was installed in 2005 to replace the AstroTurf, according to the SU men’s basketball media guide.

“The width of the building doesn’t lend itself to the true soccer purists, and soccer purists want grass,” he said. “If you ever notice that there’s very few games on FieldTurf, or at that time, we had Astroturf. It just speeds up the game so much, and it’s not a soccer-friendly environment here. So soccer plays outside [now.]”

Sala said if there was ever a time where the soccer team wanted a game in the Dome, he’d consider it.

He confirmed there are other groups that use the Dome space frequently.

“The crew team is in here running the stairs on a regular basis,” he said. “ROTC is in here every single morning at 5 o’clock or 6 o’clock, running and using the facility.”

From replacing the basketball court when needed to buying new baskets or video boards, he said he makes the upgrades necessary in a facility like the Dome.

“Everything we do here is state of the art,” Sala said. “I don’t spare any expense when it comes to the athletes and what they’re actually dealing with on the field. That’s not something I take very lightly.”

He also said he has never heard bad things from the athletes who have played in the Dome.

“For our players to come in who haven’t played here before, this is a tough environment,” he said. “I mean, that’s a good thing. That’s an advantage for us.”

He said SU players who get to practice and play in the Dome are at an advantage because it is so unique.

“I think that a lot of the lacrosse teams will tell us that it’s hard to see the ball coming because they have aluminum bleachers and that creates a little bit of a challenge,” he said.

For basketball, the advantages would be the depth perception and even the location of the baskets.

“Coach Boeheim will ask us to let the team come in [the Dome] in October to shoot to get used to the arena,” Sala said.

Any sports team that wants to practice in the Dome does, according to Sala.

“We don’t say, ‘no’ to any team, and if there was a way that we could do a game for [a team], of course we’d do it,” he said. “You don’t hear, ‘no’ out of me much. It’s how I’m going to make this work. If [a team] came to us and thought there was an opportunity for them to do something in here, we would entertain it.”